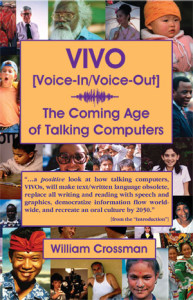 Caution, readers! Enter and explore VIVO [Voice-In/Voice-Out]’s wild terrain of ideas at your own risk. As one who has crossed and recrossed this book’s landscape and has survived to tell about it, let me offer up a brief perspective and a couple of tips for a successful journey.

Several books published since 1990 have tried to predict how computers will affect literacy. Some see the proliferation of people using the Internet and writing e-mail, together with the growing number of school computer writing labs and online book sales, as proof that literacy will thrive. Others see computers’ irresistible interactive visual displays and sound as submerging text and prompting literacy’s decline, which they view as a tragic loss.

VIVO [Voice-In/Voice-Out] is the first book to take a positive look at how talking computers, VIVOs, will make text/written language obsolete, replace all writing and reading with speech and graphics, democratize information flow worldwide, and recreate an oral culture by 2050.

As readers, you will tour that oral culture and observe how VIVOs will change the ways we’ll do almost everything-and even who we’ll be, our human consciousness. Along the way, you’ll get a taste of the new oral-aural-visual processing skills we’ll need to survive in the fast-approaching post-script world.

Central to the book’s reaching these objectives is its identification and analysis of the four “engines” that are working together to replace written language/text with VIVOs in the electronically- developed countries. Like four horses pulling a coach, these “engines” are continuously pulling, pushing, and supporting each other and, by doing so, are propelling an unstoppable historical trend.

(1) Evolutionarily, our biology and psychology forever direct us to seek speech-based methods for storing, retrieving, and communicating information.

(2) Technologically, we are driven to develop technologies that enable us to access information by speaking and listening. In addition, we tend to replace older technologies with newer ones that will do the same job more quickly, efficiently, and universally. Written language/text is a technology-an ancient technology whose basic job is to store and retrieve information. Once we understand and accept this idea, we will probably be more open to the idea that written language, like all technologies, can be replaced.

In fact, since the late 1800s, we have been rapidly introducing replacements for written language in the form of radio, phonograph/stereo, film, video, telephone, computers, and other non-text technologies that allow us to use speaking, listening and looking at graphics to access information. In the 21st Century, VIVOs will complete the replacement process.

(3) Young people in the electronically-developed countries are irreversibly rejecting text as their technology of choice for accessing information, and are replacing it with speech-based and non-text visual technologies. They’ve abandoned letter writing in favor of the telephone, and books in favor of TV, movies, CDs, and computer graphics and games. Now that spoken email is available, they will likewise abandon written e-mail. In order to process information using these non-text technologies, young people are developing, albeit unsystematically, the very VIVOlutionary skills they’ll need in order to function in the oral culture that they’re creating.

(4) Eighty percent of adults worldwide are functionally nonliterate. In the 21st Century, these billions of people will require text-free computer technology that will allow them to store and retrieve information-a huge, potential market that will continue to drive VIVO research and development.

Part I of this book focuses on developing a portrait of these four “engines.” But instead of describing each “engine” separately, one after the other, Part I spirals through them, first touching briefly on all of them in Chapter 1, then revisiting, deepening, and integrating them in Chapters 2 – 4.

Unlike Part I, Part II focuses on specific human activities and how VIVOs will change the ways we’ll perform them over the coming decades. Part II’s chapters forecast the new approaches to information access, the arts, literacy’s global political- economic role, even mathematics. Chapter 5 presents the eight VIVOlutionary skills we’ll need to access information using VIVOs; it also discusses how, as we develop these skills, we’ll change our human consciousness. Although Part I provides the foundation for the forecasts in Part II, readers can skip to Part II and enjoy any chapters there that interest them without having read all of Part I.

When I present these ideas to audiences of readers-writers, they usually respond with anxious questions and comments, including the following. If most people won’t be able to read and write by mid-21st Century, won’t the power elite then be able to reserve written language for themselves and use it to keep information from the general population? And won’t this create a society where a small number of people wield power and control over everybody else?

My answer is that this is the situation that we have today, and it is the situation that we have had since the creation of written language 10,000 years ago. The great majority of the world’s population is still being deprived of literacy skills because those in power continue to view literacy as a privilege rather than a right. In the 21st Century, however, the power elites themselves will choose speech and VIVOs over text and text-driven computers to access information and to attempt to control its flow.

I, like many people I know, dream of-and, through our actions, try to bring about-a world where freedom, equality, justice, and peace reign. It is not this dream that I’m questioning throughout this book; I’m questioning whether written language is the best technology for accessing the information that we’ll need to make this dream come true.

Using written language, I am able to communicate with only 20 percent of the world’s people-the 20 percent that is functionally literate-which is not nearly enough people to realize this dream. Using a VIVO, I will be able to communicate with everyone, nonliterate or literate, with disabilities or without, who has access to a VIVO. Though it will take more than mere communicating to achieve freedom, equality, justice, and peace, being able to break through the text barrier and communicate with greater numbers of people isn’t a bad place to start.

In Chapter 1 of this book, I say that I admire and respect everyone who is struggling to acquire literacy skills, and I urge everyone to go to school, stay in school, and learn to read and write. For the next decade or so, the ability to write and read will still be necessary to access information that will be available mainly in the form of text. After that, literacy skills will become less and less important as talking computers supersede the written word.

When I started developing this book’s main ideas in 1992, the voice-recognition technology wave was barely visible on the horizon, and everyone I spoke to about VIVO [Voice-In/Voice- Out]’s thesis treated it as science fiction. Perhaps, to some degree, I did too. Now that the wave is starting to break over our heads, its force, and the places to which it will carry us, are becoming clearer and more real, less fictitious but equally fantastic.

I’ve chosen a less formal style for VIVO [Voice-In/Voice- Out]-one closer to ordinary speech than to academic writing. I hope readers will appreciate the chance to retrieve the stored information here with your minds’ ears as well as your eyes-a good exercise in VIVOlutionary learning.

I invite readers to communicate with me and others about this book’s ideas. Tell your VIVOs to access the website for my CompSpeak 2050 Institute for the Study of Talking Computers and Oral Cultures. Speak your minds, and journey well!